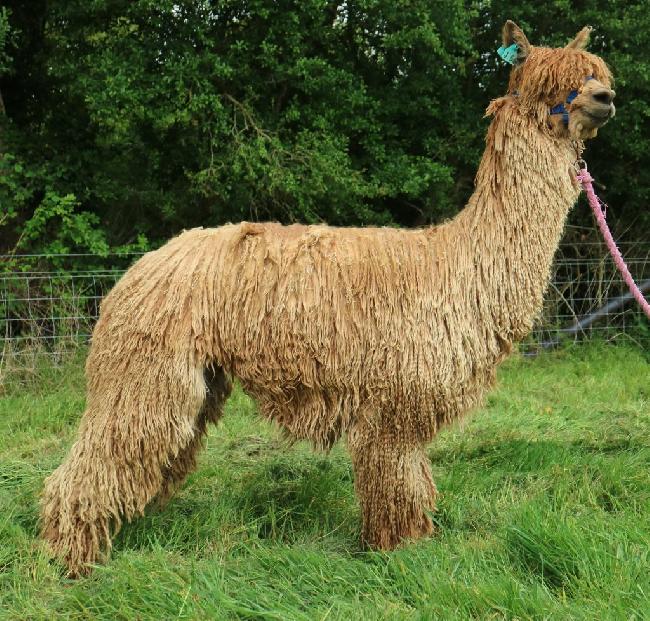 Organisations Registered With:
BAS No. UKBAS26470
Description
Binalong was a late addition to our selection in 2016, having gone for white suris Nick couldnt but be impressed with this very eye catching fawn male. Chakotah had been another male that he had aspired to may years previously but he was jealously guarded by his owners so it was not to be but the chance of a son was not to be spurned. Binalongs pedigree can perhaps boast even more great names of the American Suri breeding programme than his fellow travellers. There are not many pedigrees that will carry such names as MacGyver, Durango, Kahuna, Torbio and Uribe all on the same page.
He himself is of a most striking colour, a little more compact than the white boys he still has outstanding phenotype and wonderful balance. All up a very impressive male. His fleece is dense, with excellent lustre and very good uniformity. Again a more layered fleece he has proved to be a heavy cutting male. His first drop of cria have proved to be outstanding, giving us a broad range of colours the phenotype he carries through is remarkable as is his ability to improve on the female counterpart.
He looks set to be at the core of our coloured breeding programme as we bring him to bear on our Synergist offspring thus consolidating that MacGyver lineage even further.

Price (Drive By)
£1,000.00
Sales Tax:
This price is NOT inclusive of sales tax which needs to be added.
Discount applies for multiple bookings
Yes - Contact Breeder for details
Currency
Sterling