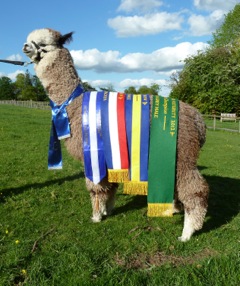 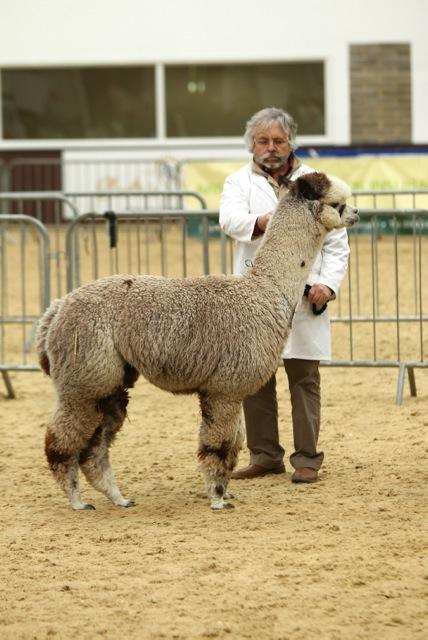 Organisations Registered With:
BAS23322
Description
The Sorcerer is an exceptional grey alpaca. The winner of 15 broad ribbons , including Champion Grey Male at the 2014 National, 2014 Showtime and 2014 Heart of England Alpaca Fiesta, under both National and International Judges. A well balanced male he has the presence and substance of bone required of a true stud. He exhibits a fabulous uniform, highly organised, and extremely dense fleece, with a high frequency crimp style, which extends into the neck, legs and belly. It has excellent brightness and is holding its fineness with a super soft handle and a long staple length.

He is the result of many years selective breeding for quality greys on our farm and subsequently has numerous greys in his pedigree. His sire is our highly respected Meon Valley Ardingly, who did so well in the show ring, only being beaten by Alpaca Stud's Nyetimber.

The Sorcerer has proven himself to be pre-potent in the production of quality, and predominantly grey offspring, many going on to win at shows, including Championships.

Price (Mobile Mate)
£850.00
Price (Drive By)
£750.00
Sales Tax:
This price is NOT inclusive of sales tax which needs to be added.
Discount applies for multiple bookings
Yes - Contact Breeder for details
Currency
Sterling