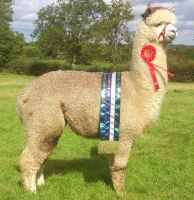 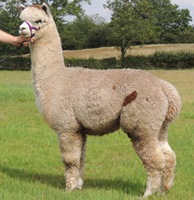 Blood Lineage:
Australian/Jolimont
Organisations Registered With:
British Alpaca Society / Australian Alpaca Association
UKBAS18437
Web link specific for this stud:
https://barnacre-alpacas.co.uk/alpacas/wyona-sunburst-rose-grey/
Description
Wyona Sunburst of Karkawarri arrived in the UK from Australia in 2012. Hes an undefeated quintuple (5 times) grey champion and perhaps one of the best Rose Grey alpacas in the world. Sunburst was carefully selected in Australia by Anzac Alpacas to join their sister stud Karkawarri Alpaca Stud that specialises in breeding grey and black alpacas.
We recommend Sunburst over your grey, black and fawn females. Grey Alpacas always attract attention in the field and it is our most heavily demanded natural knitwear colour.

Genetics - Bred from a family of Champions, Sunburst is a highly advanced grey male bred from the most elite grey lines in Australia. Bloodlines include: Blue Grass Waterloo Sunset, Pinjarra Buenisimo, Jolimont Warrior and Jolimont Conquistador.

Fleece - When we met Sunburst as a youngster he had an incredible fleece displaying characteristics found in superior whites, his fleece was fine, bright, with great density and superior crimp style carried from head to toe. He is retaining his fineness and remains a key part of our breeding programme.

Personality  He carries himself very well, tends not to get involved in squabbles and is a gentleman on the head collar. At feed times he does like to have a sneaky hand feed out of sight of the other boys!

Colour  Rose Grey
Progeny  Sunburst has 55 progeny so far around 20 are grey including Barnacre Flint, a quadruple champion, who stands at stud with us.

2013 Westmorland County Show - 1st Grey Adult Male and Grey Champion and then in the Champion line up judge Tim Hey was highly complementary.

2012 Westmorland County Show - 1st Grey Adult Male and Grey Champion and then in the Champion line up was Highly Commended by judge Cathy Lloyd.

Price (Drive By)
£500.00
Sales Tax:
This price is NOT inclusive of sales tax which needs to be added.
Discount applies for multiple bookings
Yes - Contact Breeder for details
Currency
Sterling