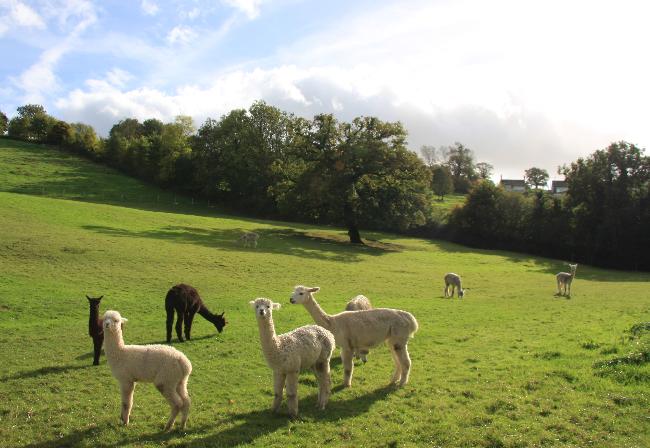 Packages:
Packages this breeder has for sale (1 Package)

We started The Letterbox Herd in 2005 with the primary aim of managing and developing a huacaya herd which collectively produced the highly desirable fleece that good quality alpacas are known for and of turning it into yarn of which we could be proud. Winning first prize in the 2009 British Futurity craft competition with a sweater knitted in yarn from Letterbox fleece and again in 2012 was an indication that we were heading in the right direction.
As an important consideration for us though, is enjoyment and satisfaction in owning haughty, intelligent and continually fascinating alpacas such as Peruvians Erica and Georgie, their much more amenable British born offspring and later brown and rose grey additions. From a starting point of three, the herd has increased in size at a steady and considered rate by using sires such as Dovecote Jacquinto of Alpaca Stud, Classical Mileend Tulaco Centurion, Canchones Witness of Inca and Wessex Don Pepe and Wiracocha and others owned by some of the most successful and effective breeders in the south of England.

Our first alpacas, white and pregnant, produced almost exclusively male cria in the early years with the occasional useful female to help us build up numbers. We put the boys to good use and some of them have gone on to work in a school as part of a programme of rural studies, others have been part of the activities offered at a residential facility and one works as a sheep guard. Naturally the early over representation of boys has adressed itself in recent years so that now we have some very nice young females to add to our breeding stock or sell.

Together with the attributes we wanted in the processed fleece, welfare and quality of life of our herd informs all our breeding, movement and showing decisions. Not all females are breed every year and all babies are born in the spring or early summer. We are fortunate in being able to provide for our alpacas, an average of an acre of grazing land each which together with conscientious care and vigilance helps to maintain a high level of health.

We manage The Letterbox Herd using the principles of Camelidynamics at Handler?s Seal level. The purpose of this approach is to be fun, kind, respectful and efficient in handling and training alpacas and other camelids. One result is that visitors to the farm comment on how calm our animals appear to be. All are handled regularly and most, except the very youngest, are halter trained. Each year we are invited to display some of our alpacas at local fetes and fairs where they display much confidence.

Homers Farm includes a site of nature conservation interest with a useful diversity of plant and grass forage to which the alpacas have access. As hay is made on the farm the alpacas benefit from this range of plants all year. A friend described Homers Farm as "alpaca heaven" since as well as the SNCI the location offers our alpacas acres of space, lush pastures, hills and streams, and an absolutely stunning view of the Blackmore Vale.

We are members of the British Alpaca Society and active members of the South West Alpaca Group. We welcome interest in buying our alpacas, especially from breeders aiming for fine quality animals nurtured in a caring, relaxed and sensitive way and interest also in the fleece they produce. We are always happy to talk about how keeping alpacas helps us preserve the integrity of the SNCI of which we are guardians.

Services Offered by this Breeder