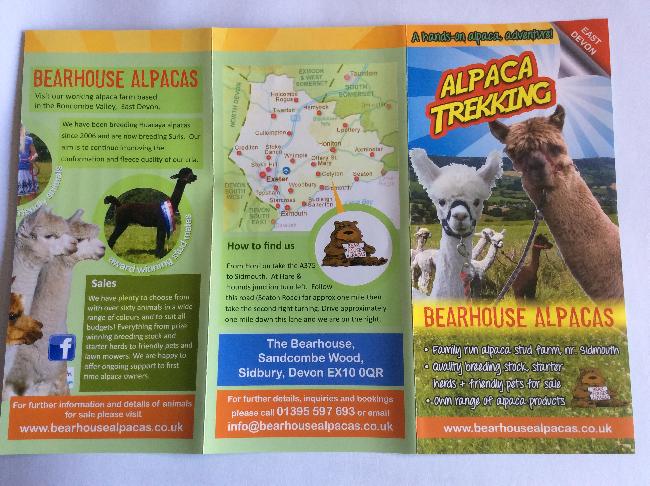 Breeder Name:
Bearhouse Alpacas
Contact Name:
Richard Harris
Address:
The Bearhouse
Sandcombe Wood
Sidbury
Devon
Postcode/Zip:
EX10 0QR
Telephone Number:
07714 031 844/01395 597 693
Email:
Send an email to this breeder
Web:
http://www.bearhousealpacas.co.uk
Country:
England
Location
Devon
Town/Village:
Sidbury
Breed Type:
Huacaya and Suri
Herd Size (Approx.):
70
About This Breeder:
Bearhouse Alpacas, based in the beautiful Roncombe Valley near Sidbury in East Devon, breeds quality alpacas for sale as pets and breeding stock, provides stud services and is also a thriving alpaca trekking business. Treks of an hour and a half in the bridleways around our farm, situated in an area of Outstanding Natural Beauty, are run all year round, weather permitting. Trekking vouchers and alpaca products including alpaca wool and alpaca socks can be purchased on our website: www.bearhousealpacas.co.uk).

We are re-opening for alpaca trekking from Monday 13th July! Please phone 01395 597693 for more information.

We're still closed due to the COVid-19 lockdown but hoping to RE-OPEN in mid-July for alpaca trekking.

We have some cria (baby alpacas) born in May which we hope to have on view!

We've had to make the difficult decision to increase our prices for alpaca trekking for the first time in six years due to losses this summer and to ensure that our business remains viable.

We will be making an increase of £5 and charging adults £25 and children £15 when we re-open and will be taking out smaller groups than usual with social distancing measures in place.

Looking forward to seeing you soon!

We have collected our latest batch of wool from the mill in Cornwall and now have several dyed alpaca wools (50 gm and 100 gm) on our on-line shop: www.bearhousealpacas.co.uk as well as natural blends!

Alpaca trekking gift vouchers have sold well over Christmas and we have had a regular flow of customers over the winter so far for our popular alpaca treks.

The house building project is coming on well. The 'second fix' will start in March. Looking forward to having a proper shop ................

Alpaca trekking has been fully booked throughout the summer of 2018 and trekkers have coped very well with the building site! Yes - we were granted planning permission in the spring to build a house here at the farm and the roof will be on by October/November ready for the onset of winter.


Summer 2014 has been busy with exports to Italy, Holland and Belgium. Alpaca Trekking is now a regular event adding another dimension to our farm, although we have sold a few trekkers! We'll be busy next spring training up this year's cria.

We will be at the River Cottage Food Fair this Bank Holiday weekend - 27th, 28th and 29th May. Come along and see the alpacas!

First prize in the adult fawn female class for Bearhouse Daisy. Alpaca judging continued through Saturday, despite the cancellation of the main show.


Alpaca Trekking In The Rolling Hills of East Devon

Spend a couple of hours with these beautiful animals, trekking through the East Devon Countryside from our farm outside Sidbury. Becoming an alpaca trekker will be an unusual, enjoyable and unforgettable experience. You will be able to take in the glorious scenery of the Roncombe Valley with its steep tracks and rolling hills, or an easier, but just as enjoyable walk, can be arranged. The tracks and pathways may be uneven and suitable footwear and clothing should be worn. Treks can be from 1 to 2 hours in duration and you are welcome to bring a picnic.

The Prime Minister made an appearance at this year's North Devon Show, but was more interested in Jacob sheep than alpacas!

Still, it was worth the early start to the day for Bearhouse Alpacas, as we came away with five First Prizes, a Reserve Champion rosette and one second prize. We took six alpacas to the show and the results were as follows:

The Judge was Nick Harrington-Smith.

We're taking a rest from showing for this year now, apart from our local fair in Sidbury, but are very pleased with our 2013 results!

A good day on Thursday at our local show - The Honiton & District Agricultural Show. We came away with two first prizes - one for Bearhouse Valentino, our dark brown stud male and another 1st Prize for Bearhouse Kiara in the junior brown female class, a third for Dreamfield King Louis, our white stud male in the adult white class and fourths for Bearhouse Daisy in the Intermediate Fawn Female Class and Bearhouse Roxy in the Intermediate White Female Class. Judge was Catherine Lloyd from EP Cambridge Alpaca Stud.

SUCCESS FOR BEARHOUSE ALPACAS AT THE DEVON COUNTY SHOW

This year?s Devon County Show attracted record numbers of people with sunshine throughout the three days, only a few spots of rain and almost a heat wave on the Saturday!

The alpacas were a very popular attraction with most of the top breeders from the South West showing their huacaya and suri alpacas. Many of these animals were fully fleeced for the show and will be pleased to be shorn as soon as possible now that some good weather has arrived. Shearing now will give enough time for some re-growth ready for the summer shows.

We have now sold out of haylage but still have hay available at £3.00 per bale. We can deliver for cost of fuel.
Please phone Richard Harris on 07714 031 844
for information.

After five years of breeding Bearhouse female alpacas with award winning stud males, the success of the long term breeding programme is undeniable in 2011.

This year has been an extremely pleasing year at the three shows where we exhibited our animals: The Devon County Show, The North Devon Show and The Honiton Show.
Bearhouse Alpacas won the ?Best Small Breeder? award at the Devon County Show in May, with a 1st, a 2nd and two 3rd prizes and was then awarded three 1st prizes and three Reserve Champion rosettes, plus a 2nd and 3rd prize at the North Devon Show in August.

The string of successes culminated in two year old Bearhouse Valentino (sired by solid black ? Classical Ikon) winning 1st prize in the adult black male class and then overall ?Champion Black Male Huacaya? at the 121st Honiton and District Agricultural Show, billed as the largest one day agricultural show in England. Bearhouse Alpacas also won another 1st, two 2nds and a 3rd prize at the Show.

The best in agriculture was on display at the Honiton Show, with local farmers and breeders showcasing their sheep, cattle, poultry as well as alpacas, to crowds of more than 18,000.

Bearhouse Valentino is now working at stud at Bearhouse Farm - his first cria are due Autumn 2012.

If you would like to buy an alpaca/alpacas but do not have anywhere to keep it/them, we can take care of it/them here at Bearhouse Farm.

If you would rather not buy on-line, please visit us here at the farm in Sidbury or buy our wool and felt from the Spar Shop, Jet Garage, Turk's Head, Honiton, Devon EX14 1BQ. You can also phone us here at the farm on 01395 597693 to place an order. Many thanks.

Services Offered by this Breeder

Agistment Services:
Yes We are able to offer an agistment service at a cost of £1.00 per day plus VAT.

Clients using this service can visit at any time during a normal working day and outside hours by arrangement.

We will travel within a 60 mile radius.
Backup/Support Services:
Yes Help and advice regarding nutrition, vaccination, worming, shearing and general alpaca husbandry is available to all our clients by phone or email.

We are very interested in the welfare of animals leaving our farm.
Exporter:
Yes
Sells alpaca yarn/knitwear:
Yes We currently sell four natural colours on our website in DK and 4 PLY. Light fawn, medium fawn, light grey and brown (DK only).

We sell all of the above plus black double knit in the Spar Shop, Turk's Head, Honiton EX14 1BQ along with other alpaca products.

Pure alpaca felt in four natural colours is available in 4 ft x 3 ft sheets (and smaller by arrangement) at a cost of £18.00 per sheet. Colours: black, white, fawn and brown.
Alpaca fleeces for sale:
Yes We have no raw fleeces for sale at the moment.