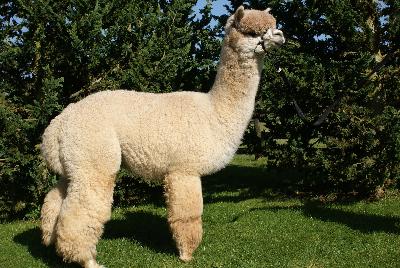 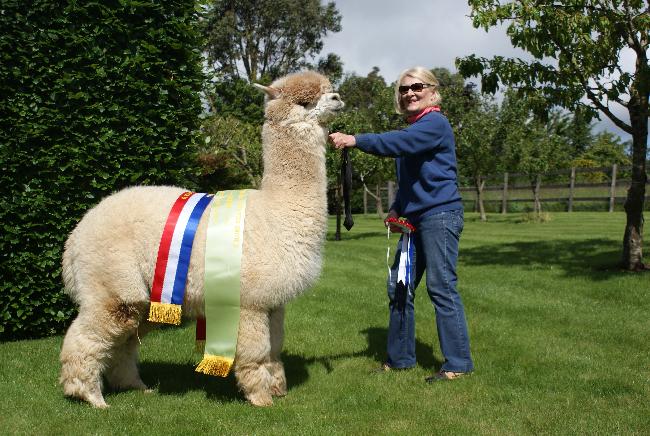 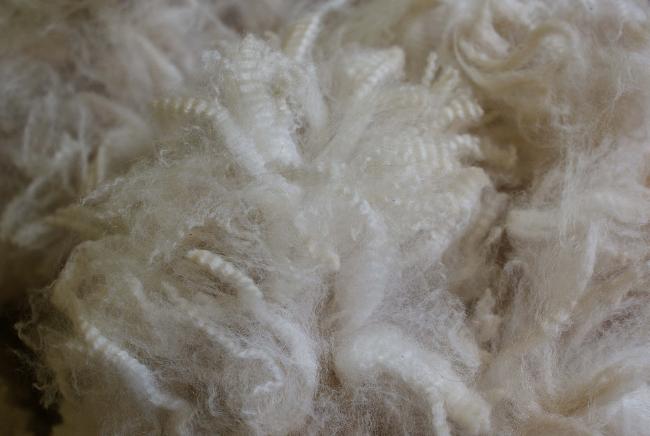 Shaston Prince has excellent conformation, a true to type head and a dense, crimpy and very fine fleece which he is still holding aged 15 years.
He started working in 2007. The shorn fleece photograph is of his 4th fleece (2009).
All of PRINCE'S cria have been good. They have excellent conformation, good bone, crimp and fleece density and a desirable short head type. They, also, have very low micron fleeces, which many have held well into their senior years. To date all but one of his cria have been solid coloured and often follow the colour of the dam or are darker than either parent, so, to date, he seems to be a good choice for those wishing to breed top quality fawns and browns. One of his daughters, Snowshill Tabitha (1st fleece 14.6m and curv. 59.70), was awarded Champion Fawn Female Huacaya at the 2009 Spring Alpaca Fiesta and 1st Junior Fawn Female at the 2009 Royal Bath and West as well as Best British Bred Huacaya in the show. She was, also, awarded Ist Junior Fawn Female at the Three Counties Show as well as Champion Fawn Huacaya and Champion British Bred Huacaya. All three of his 2008 cria were placed at the BAS 2009 National Show. Another daughter, Snowshill Felicity, was first placed adult fawn fleece at the 2011 Scottish National fleece show , a son Snowshill Vivaldi was Reserve Champion Beige male at the 2012 SWAG show and Reserve Champion Intermediate Male at 2012 Three Counties and many of his other offspring have been well placed in shows. At the 2013 North Somerset, a daughter, Snowshill Persephone, was Champion fawn huacaya and at the Royal Three Counties show and was reserve intermediate female huacaya (she still wins fleece championships as a senior). Yet another daughter, Snowshill Octavia was Supreme Champion huacaya at the 2013 Royal Three Counties Show and a son, Snowshill Prospero, was Reserve Champion Junior Male at the same show. Snowshill Fifi, another daughter, was Champion Light Female at the 2015 North Somerset and Three Counties Shows.
In fact, Prince has only produced very good to superb cria - most of whom one would be happy to show.